The past through a lens

Posted on November 26, 2016 by morselsandscraps

An exhibition of the photos of Stanisław Kazimierz Kossakowski at the History Meeting House gave me a ticket to the past, the years between 1894 and 1904, the junction of the nineteenth and twentieth centuries. It is largely a privileged life he captures through his lens, a life of house parties, hunting, fancy dress, carriages. But he also captures the childhood of his daughter Jadwinia through intimate portraits; takes pioneering photos of the forest; and documents village life. There were 130 photos in the exhibition, beautifully and informatively curated. The bulk of his surviving collection is in Lithuania, once closely connected with Poland as the other qpart of the Polish-Lithuanian empire.

The family estate was at Wojtkuszki where he had his studio, but he also had a palace in Warsaw at the top end of Nowy Świat, until the beginning of the twentieth century one of the most elegant aristocratic residences in Warsaw.

His photos obviously appeal to people. The rooms were more crowded than I’ve seen any gallery, and people were standing in front of photos deep in conversation, a whole range of ages from geriatrics like myself to young men and women in their twenties. When I speculate about the appeal, I decide on the brilliance of the photography and the interest people have in recognising familiar places.

His photos are far better than my photos of his photos indicate. 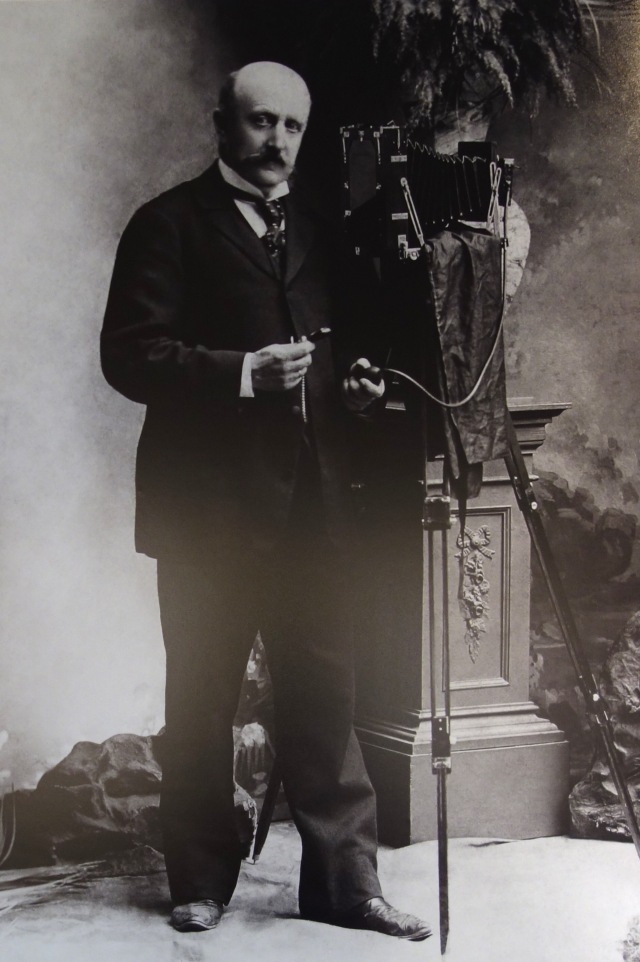 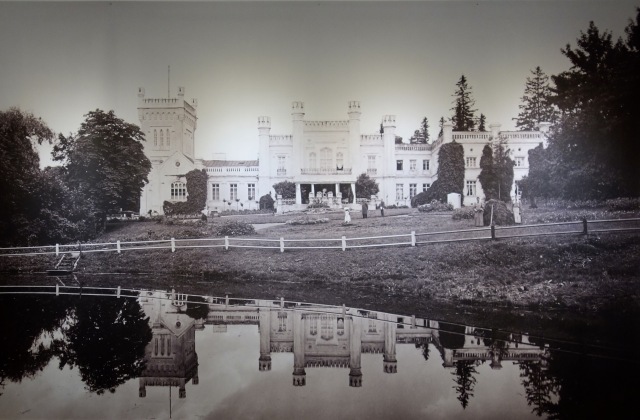 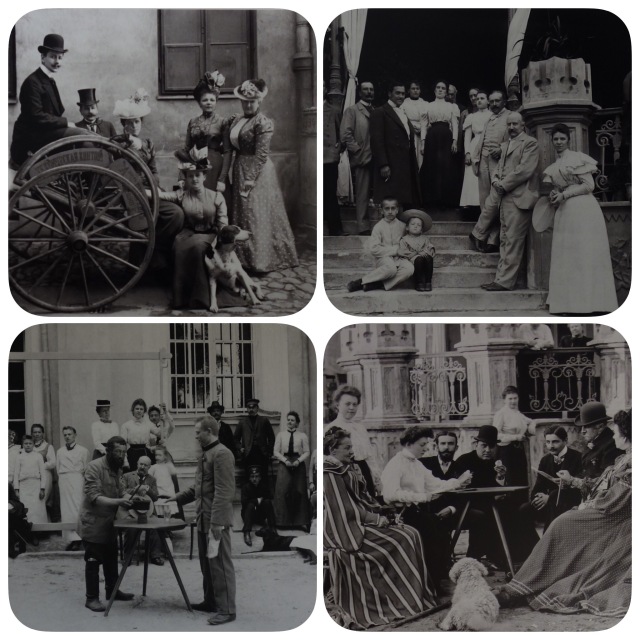 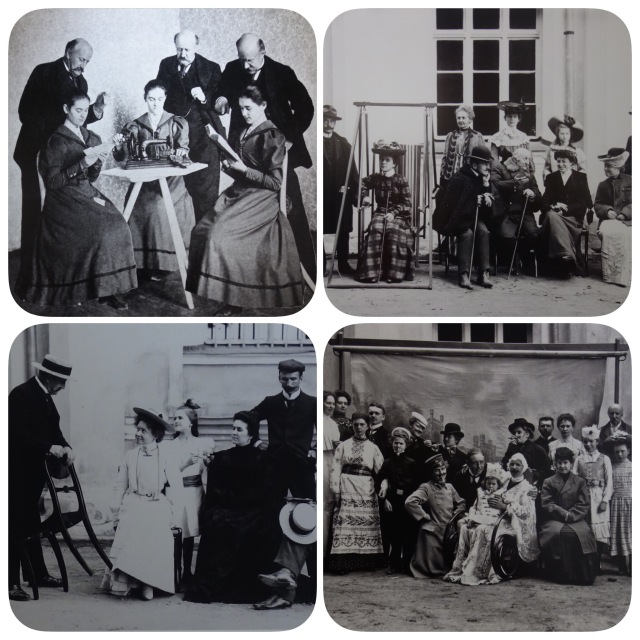 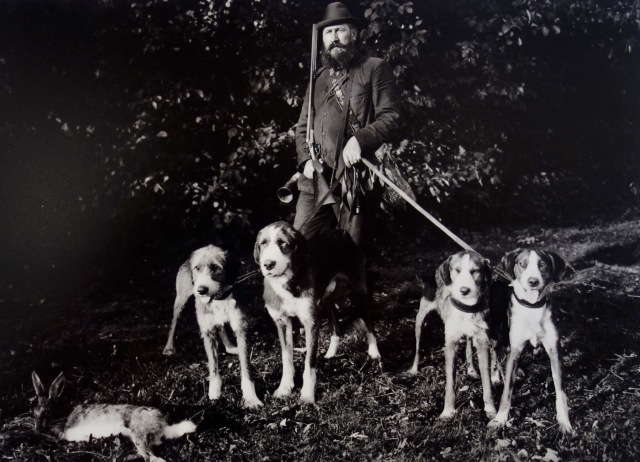 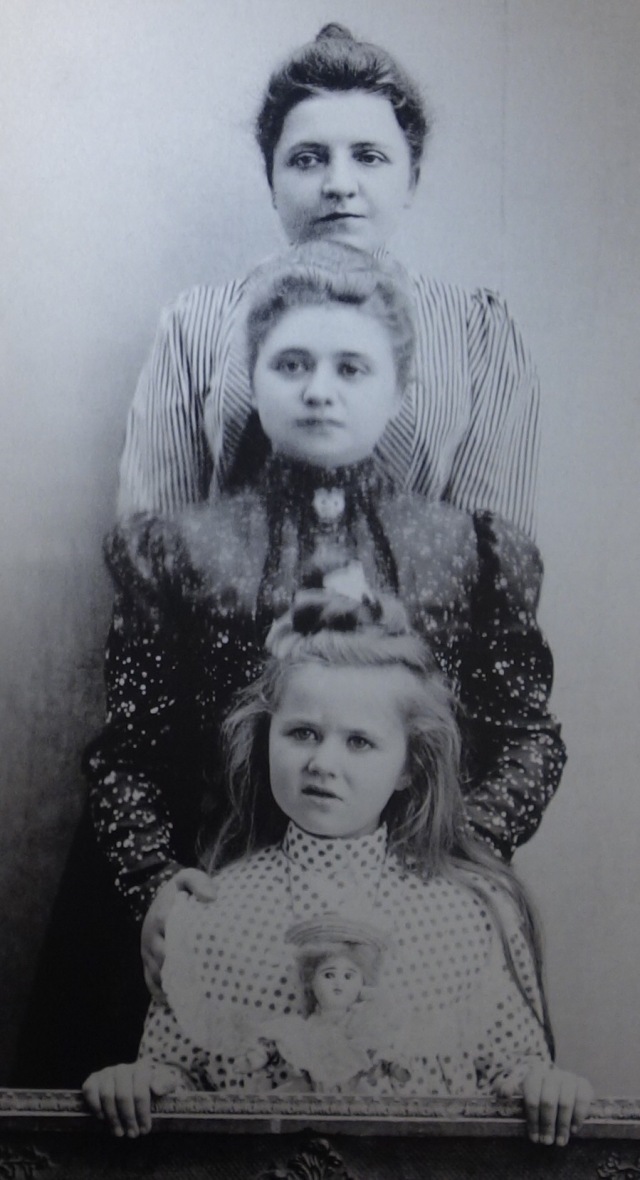 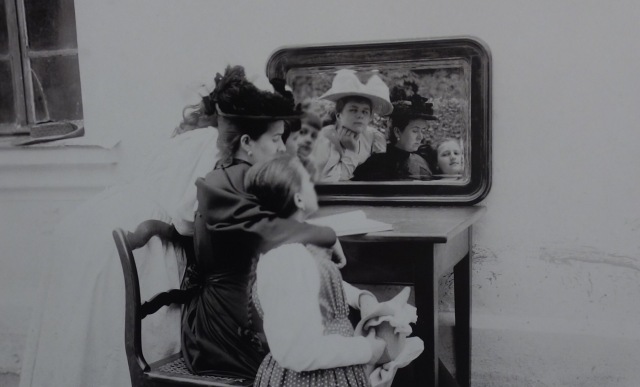 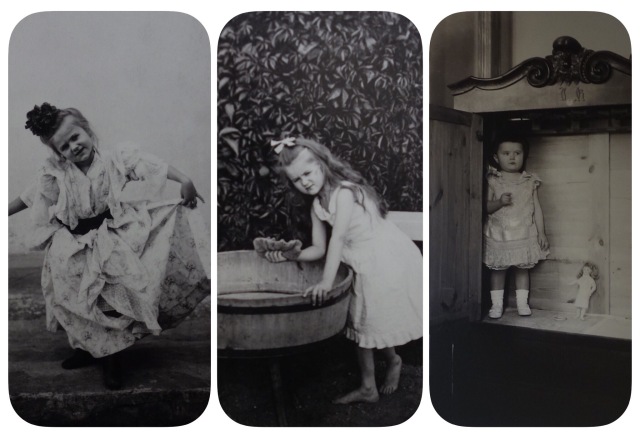 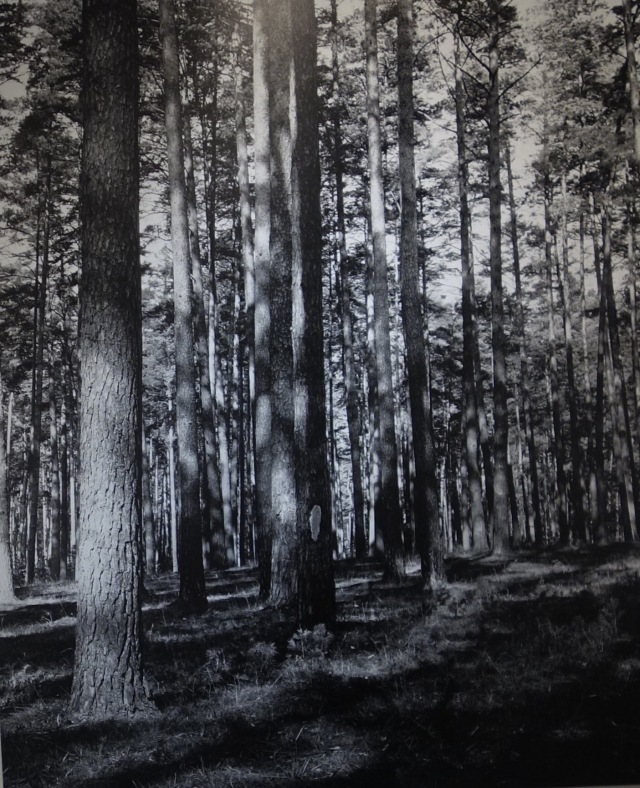 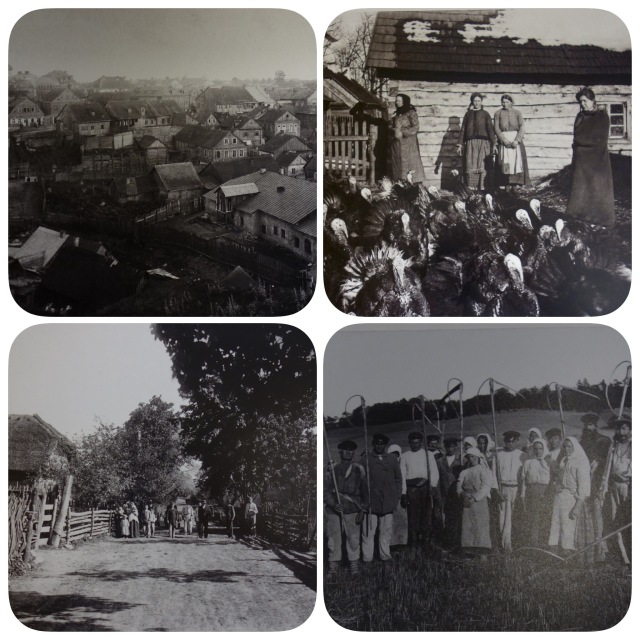 From now on, I’ll be including the history of any palaces I encounter, thanks to my treasured “The book of Warsaw palaces”. My reason for intruding palatial histories? Their story reflects the story of Warsaw: the aristocracy, the repurposing, the destruction, the rebuilding, the modern usage.

Built in 1784 by a Warsaw textile merchant descended from a French Huguenot family who settled in Berlin, it had two storeys? When it was sold in 1848, the new owner added a storey, and four stone figures. The Kossakowski family bought it in 1858. In 1905 the palace was converted to an apartment house. In 1911-12 a large covered skating rink was built, later converted to a roller-skating rink. Neither of these brought in the money expected and it was converted again, to a cinema this time. In 1930, it was sold to the Warsaw Insurance Company, and during the War almost totally destroyed. Rebuilding from the foundations began in 1946. In 1968 it was taken over by the state, and in 1985 it housed the offices of the Company of Housing and Administrative Services for Foreign Diplomats. Now guess what? Kebab King, a beer and vodka drinkery and Costa Coffee have taken up residence at street level.

The first photo shows the palace in 1900 from Branicki Palace on the other side of the road: about where I stood to take the remaining photos on a gloomy day in November, 2016, my first day of cold feet, despite alpaca socks. 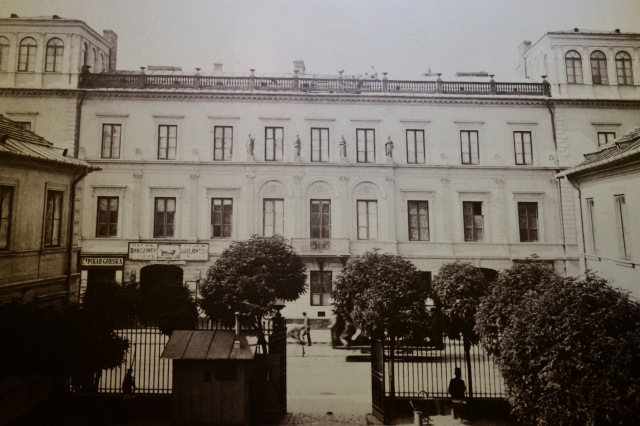 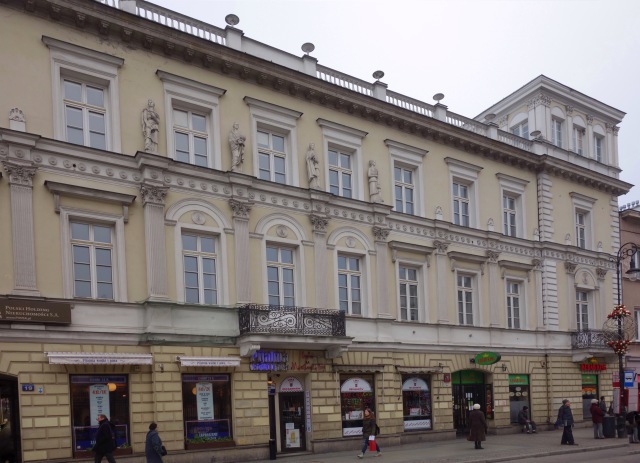 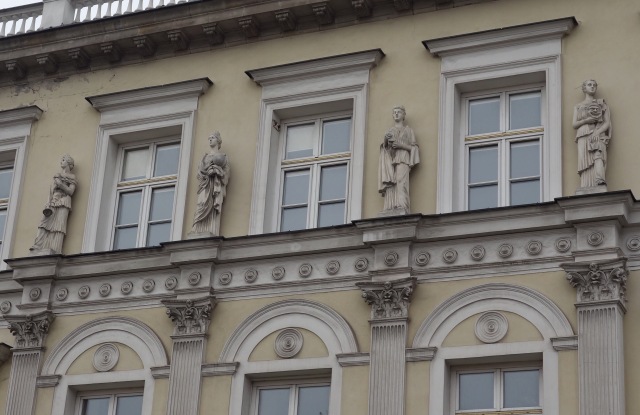 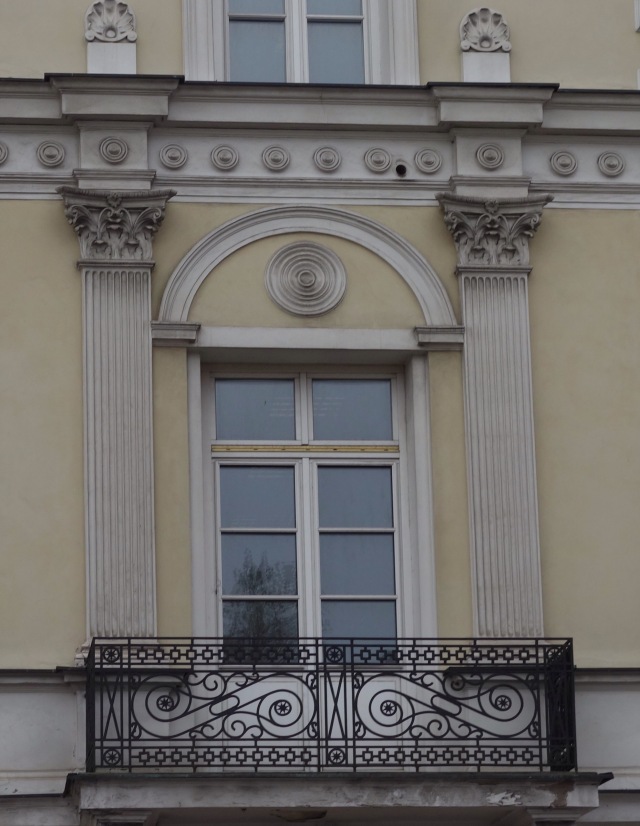 A retired Australian who spends a lot of time in Warsaw, and blogs as a way of life.
View all posts by morselsandscraps →
This entry was posted in palaces, photography, photos and tagged History meeting house, Kossakowski Palace, Stanisław Kossakowski. Bookmark the permalink.

6 Responses to The past through a lens