Posted on November 2, 2016 by morselsandscraps

I’ve now been in Warsaw for 8 months. It’s hard to say exactly how that time has moved. Sometimes it seems to pass at the crawling pace of a glacier; other times the weeks gallop by.

This month a vague routine has been re-established after the long stretch of summer holidays: like all routines it’s liable to change in a moment – a fever, another commitment, a just-for-this-week swap. But by and large, we walk down to pre-school and shop at Biedronka Monday to Thursday. On Tuesday and Thursday we pick Maja and Jaś up at 3.30 and come back home with them for a few hours. On other days I’ll go out or stay in, depending on weather and mood.

The weather seems to have been unremittingly rainy and the chill, although on reflection there have been sunny spells. The cold cuts through my coat and invades my ears. I face the usual dilemma – rugged up outside means roasting inside, and I leave a puddle of sweat behind in the preschool dressing room. At least in museums I can divest in the cloakrooms. There have been a few light frosts, enough to kill the window-ledge basil.

The sycamore helicopters continue to whirl past the apartment window and leaves settle, soggy and mainly yellow, on the grass and cobblestones. The most significant domestic event is J’s return to meat in an attempt to fight off winter ills: we still haven’t been well enough to be jabbed for the flu.

Or at least it was the most significant event, until Saturday, when he booked a flight back to Australia for six weeks, leaving on Tuesday. I’ve had a few mild touches of homesickness – for the escarpment bush and, oddly, for the Canberra road just out of Bungendore, although that might have been more about the desire to get behind the wheel of the car on a country road. But certainly not enough to get me on a plane.

Maja and Jaś aren’t delighted to return to pre-school: Jaś says hopefully “What are we doing today?” as we leave the apartment, and asks us to pick him up “soon”. Pani Teacher talks to M about separating the twins a bit in class, that same Pani Teacher who gives them each a highly inflated balloon to take home. No prizes for guessing that one bursts and that horizontal grief ensues. After some thought Maja offers Jaś hers, but that is no solace. So we buy two bags of balloons, and spend joyful time at home inflating them trying to avoid each other’s germs; chasing them around; and letting them fly off untied making repulsive noises.

The pre-school drop-off becomes fraught towards the end of the month. One day they refuse to leave their apartment without Daddy, who is already a bit stressed by the workload before he changes jobs next month. They often leave our apartment filling the stairwell with screams of outrage over … anything.

My role is resident slow coach. Pity help me if I overtake the group of fast coaches: I’m breaking the rules, and that won’t be tolerated. Although it means I rarely feel little hands in mine, it’s a great incentive to keep them moving through all the distraction offered by the parkland. One day Maja takes pity on me when I make a sad face and comes back to walk with me. A few times I even carry Jaś on my shoulders.

J finds a pair of yellow submarines, which become the centre of many stories that include luminous fish at the bottom of the ocean and mermaids. One day we find a patch of sun uninfested by frolicking dogs and kick balls around, their soft spotted balls. The junior soccer balls I bought are still too heavy. The frisbees are more successful and so are the paper planes from J’s production line.

When I discover a pattern for an origami frog that actually jumps we retool J’s factory for animals: birds with flapping wings, an owl to which we add googly eyes, a cat, a quoll and a fortune teller. J is quite adept: I stall every time at the petal fold as we bond over manufacture. J reveals a range of creativities: he writes and illustrates a story featuring our son’s dog and our daughter’s cat; and creates a diorama of volcanos and trees as background to a collection of dinosaurs. Maja and Jas both make a simple origami frog and a ladybird.

Reading is a major part of their pleasures. A book is always a lure. They even, almost inadvertently, eat food they’ve been wailing about as they focus on the story, hand reaching into the bowl while their eyes stay fixed on the picture. Donald Duck comics in Polish are a particular favorite with Jaś. When we arrive home from pre-school, he makes a beeline for the growing pile and he’s unreachable until he decides to do something else. A lovely reprieve, during which I can peel off layers and begin heating dinner.

R & M buy a part share in a camper van, a slow but roomy 40 year old beast. Jaś wants to live in it, but Maja is a pragmatist, and says “There’s not room for all our toys.”  Heading off to preschool one day, there’s some discussion about taking the bikes. We say “Perhaps tomorrow.” Jaś declares “Daddy said today is tomorrow.” Mummy wants to know all about preschool, and Jaś says “No. It’s too exciting.” We’re nearly home, and Maja’s hands feel chilly. I produce gloves and fury: “Take them back. They supposed to stay at pre-school.” When we’re playing with playdoh, Maja takes inordinate pride in recognizing the playdoh-cutting potential of a plastic duck J found in the park, repeating over and over again, over a few days, “I knew!” There is no predicting anything they might say.

My favorite eavesdropping? Mummy tells them they can have a treat when they get home: chocolate, or a video for half an hour. Maja’s pretty definite she wants the video, Jaś the chocolate. Mummy tells them they have to agree. Maja slips into negotiator mode. She moves close to Jaś, and says in a quiet reasonable voice “Do you want the video?” Jaś is busy with a book. He continues to read. Maja repeats her question. Without looking up, Jaś says in a slightly bored tone “Not especially.” 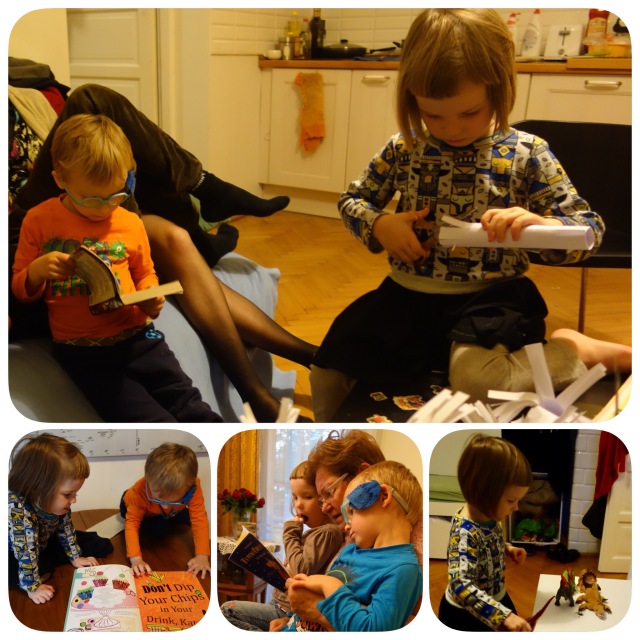 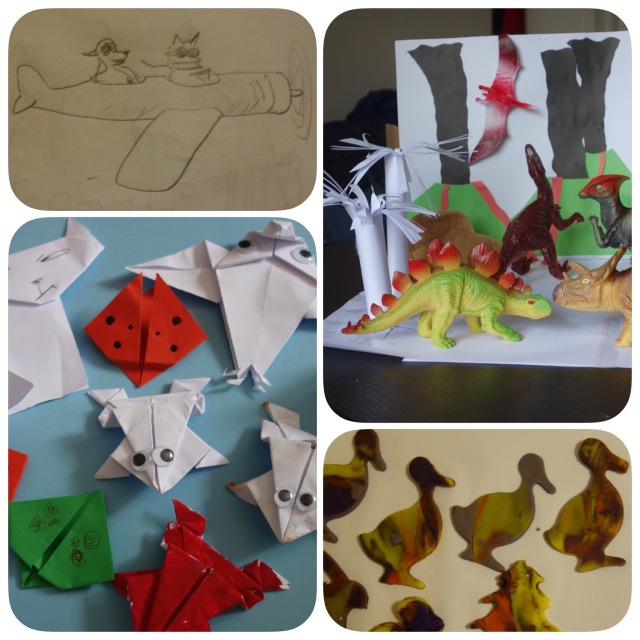 I’ve been out and about a lot more this month, each outing giving me a lead to another place to go, an inexhaustible list. I’ve boarded the Titanic; spent time with a Chinese scholar;  joined the makers of folk art; taken an audiotour at the Museum of the History of Jews in Poland*; rambled around the Dutch garden at the Orangery; entered the life of Nobel prize winner, Henryk Sienkiewicz*; enjoyed the luxury of rugs at the Tin-roofed Palace;  walked the leaf-strewn paths of the Jewish cemetery; listened to Chopin in a photography gallery in Castle Square; traced Poland’s journey to the present at The Museum of Polish Independence*; and pursued lettering all over Warsaw. (* means a post pending – too busy doing to write!) 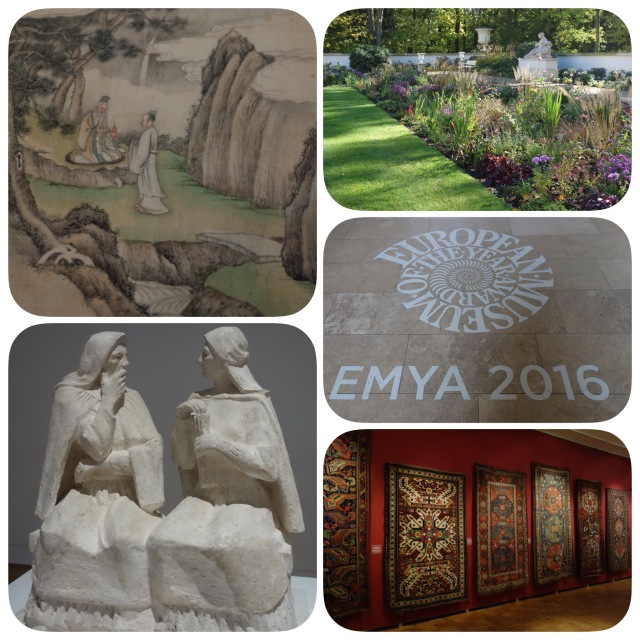 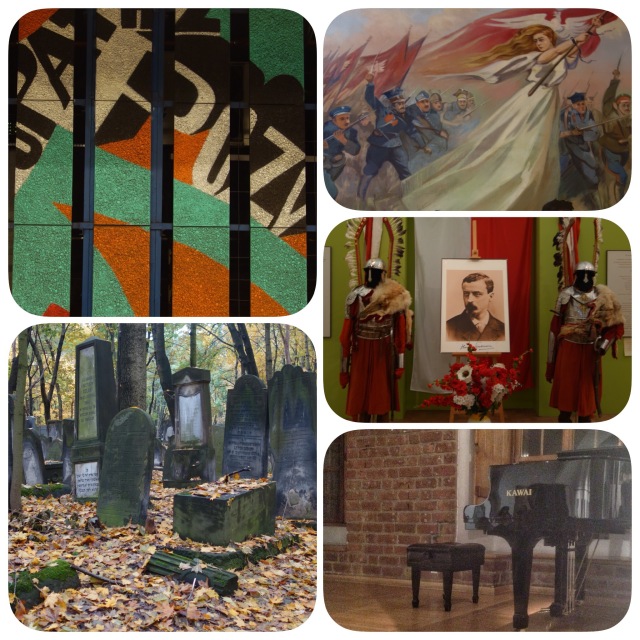 Somehow I finally feel as if I’m in control of my Warsaw life. I’ve returned to my daily diary, and what I write in it seems to happen. I snaffle the second last seat to see the Moscow ballet in December, booked online by my daughter. Then I get daring and book “Cymbeline”, “Mother Courage” and a Chopin concert. I have another haircut, shorter than I’ve ever had it, and I like it, except at 6am when it’s standing on end every which way and I know I have to shower now to wash it into submission. I order a rain jacket from England and it arrives within 24 hours. My black coat is shortened and my sandals mended. And finally, after 8 months, I have a functioning laptop: five minutes it took, once we made up our minds to find a repairer. All he had to do was jiggle the battery back in place, and it cost nothing. I shop for kids’ books at a shop where I can pile possibles on the table and audition them one by one, in the sure knowledge that I’m making good judgements. The result? I spend 650 PLN and have a stash of seventeen books and a list of future titles, augmented by heaps of ideas from my friend Annette.

I’ve spent a bit more time with my daughter: a morning coffee followed by a visit to the cobbler and tailor; a Friday night talk-fest over cider and beer; lunch at a cafe half a block away.

I edit my Australian granddaughter’s final essay before she leaves school (a monologue based on “The Great Gatsby” where Daisy debates whether to go to Gatsby’s funeral), delighted to be asked and impressed by her imaginative involvement and her way with words. 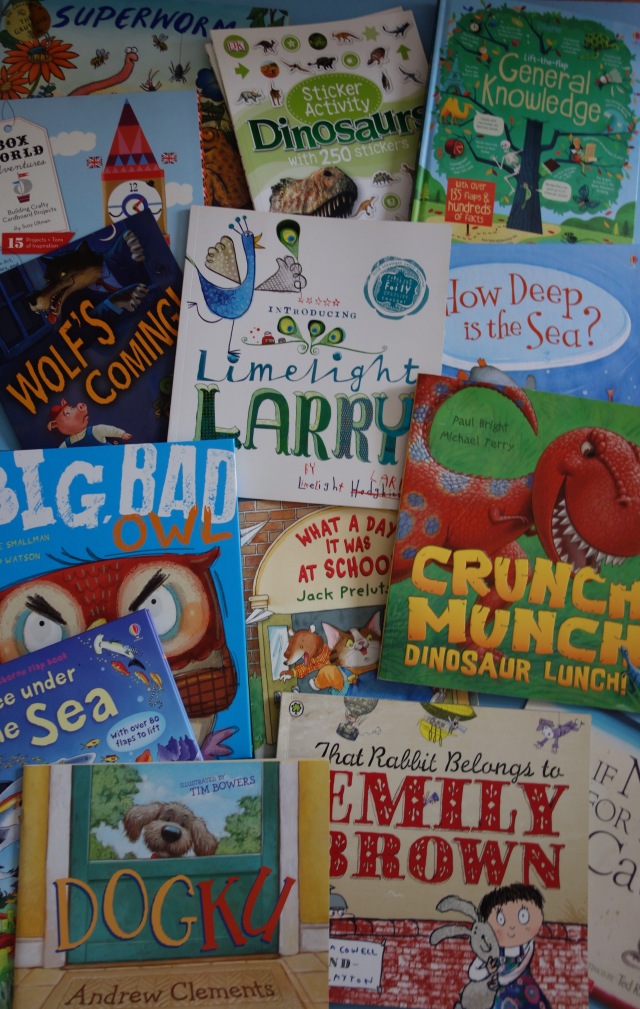 It hasn’t all been triumph and delight. I lost the apartment keys in a shameful failure of attention. I pride myself on not losing things. And then the lug fell off my specs, I suspect after Jaś, on my shoulders, grabbed my face to turn it towards something he wanted me to see. The keys were replaced, and being in possession of a code, I now only have to remove them from safety at the front door of the apartment. My specs were mended with despatch. However, I haven’t been able to source paper fasteners or string.

As we descend into winter here, spring is breaking out in Australia. My old friend Sarah is a wonderful gardener and photographer and she gave me permission to use these photos to express an aspect of my homesickness. 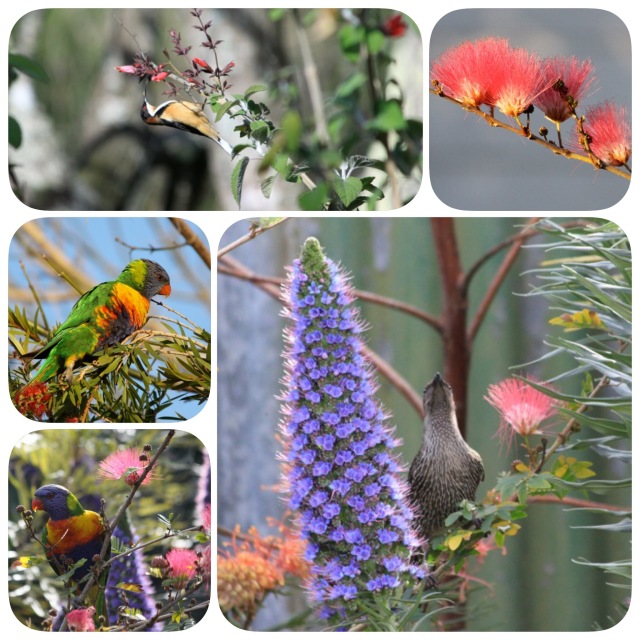 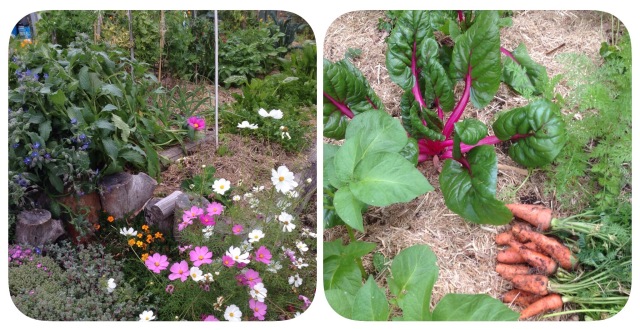 You might remember the agonies my son went through deciding whether to  buy a block of land in northern NSW eighteen months ago. Here it is, complete with mountains, wild river and at least three species of orchid. My most beloved senior granddaughter has reached the end of her school days, and has had a movie shortlisted in a competition. We’ve invited her to visit Poland in February. 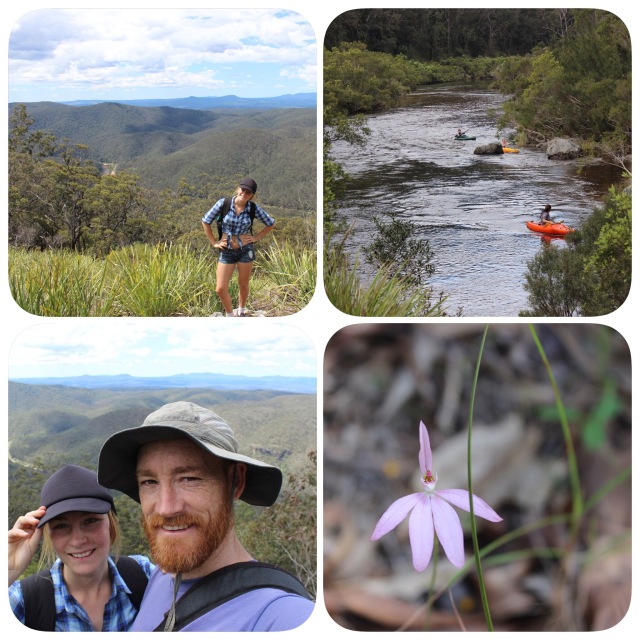 My Australian daughter has paid a quick overnight visit to my Potato Point son, activating my homesickness with a sign outside Braidwood, and the trio on the beach. 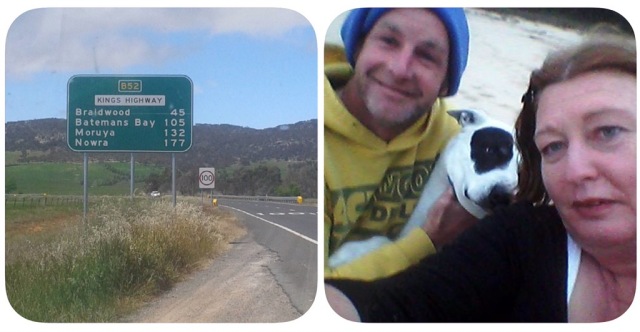 And now for a November living alone.

A retired Australian who spends a lot of time in Warsaw, and blogs as a way of life.
View all posts by morselsandscraps →
This entry was posted in photos, stocktake and tagged origami, triumphs and failures, twins. Bookmark the permalink.