Oriental rugs at the Tin-Roofed Palace

Posted on October 31, 2016 by morselsandscraps

For Annette who has a liking for rugs, and whose knowledge I could’ve used as I walked around the exhibition.

J leaves for six weeks R&R in Australia on Tuesday. To still my anxieties, mainly to do with single-handed twin-wrangling, I visit the Tin-Roofed Palace, just below the Royal Castle, last seen in dawn light on an early morning walk. It has a long history, beginning as the house of the Royal Armourer around 1651. From 1777 it held apartments for the court of King Stanisław August, and was connected with the Castle by a library building. In 1820 it was sold by the King’s niece to the Russian Emperor, Alexander 1, and it belonged to his successors till 1915. It was partly burnt down during the German rampage in WW2, and rebuilt in 1948, using in part the paintings of Canaletto the Younger. Now it’s home to an exhibition of carpets (today’s goal) and prince’s apartments, reconstructed as they were in the early 19th century (for another day.)  The name of the palace refers to the copper sheets covering the roof, a rarity in the first half of the 18th century.

I wasn’t expecting the level of calmness offered by dim light and the rich colours of carpets lining the walls in twelve rooms.

Most of the rugs are from the nineteenth century: Caucasian, Persian, Turkish, Anatolian, Middle Eastern and Uzbek. They were collected by Teresa Sahakian (1915-2007), a Pole living in Belgium, and her husband, George, an Armenian and a diplomat, who had a remarkable knowledge of oriental art. It’s one of the largest collections of oriental rugs in the world. As well as carpets there is also a collection of Montelupo pottery plates from the 17th century, a few Aubusson tapestries, and a pair of chairs. 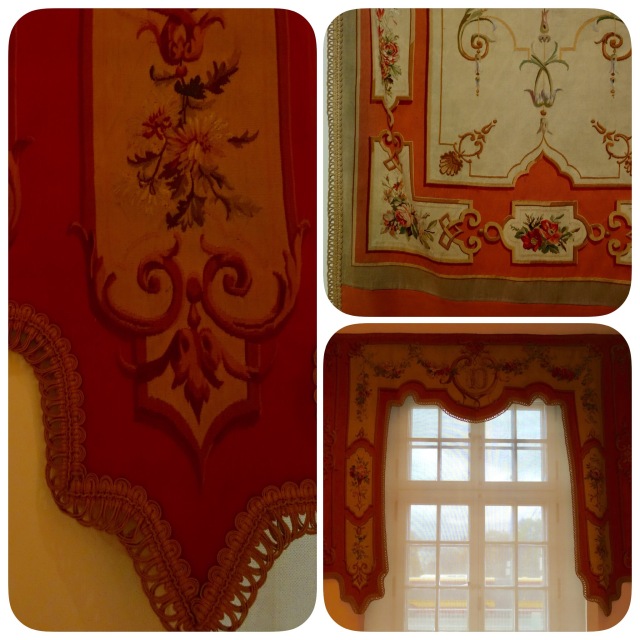 Prayer rugs fill a couple of rooms. Nearly all of them feature the customary mihrab shape in the centre.

I leave the calm and colour for the chilly outside, the view across the underpass and back up to Castle Square, and the reality of J’s departure.

A retired Australian who spends a lot of time in Warsaw, and blogs as a way of life.
View all posts by morselsandscraps →
This entry was posted in art, museums, photos and tagged Aubusson tapestry, Montelupo pottery, prayer rugs, rugs, Tin-Roofed Palace. Bookmark the permalink.

19 Responses to Oriental rugs at the Tin-Roofed Palace