Poland – a land of folklore?

Posted on October 24, 2016 by morselsandscraps

I find my way round Warsaw by serendipity and chance mention. So now I’m splashing through puddles and standing far back from zebra crossings on the way to Zachęta gallery. The building is grand, but I don’t take photos outside because I don’t want to kill my camera. But inside, I can’t stop.

I walk up the grand marble staircase, admiring plaster decorations; and wrought iron balustrades; and dragons supporting intricate lampstands. A strange contrast to the folk art I’m there to see. But this is only Paradox 1.

The exhibition is an attempt to answer a number of questions. What was the place of folk lore and folk art in the first decades of the People’s Republic of Poland? How did the people’s government use them? How did the status of folk art change when it began to appear in museums and galleries? How did the folk artist fit into the art world? As I ramble through the exhibits, there’s a game to play: spot the paradoxes.

Once I enter the exhibition space grandeur is replaced by colour and the skill of hands. I’ve met the women folk painters of Zalipie before, in images of their painted village. After the war they were “discovered” and became very popular. They began to work with professional artists in design collectives, creating textile patterns and plate decorations. The flower patterns from cottages and barns were adapted as decorations for ocean liners and used in the Palace of Culture and Science on chandeliers. (Paradox 2)

The double warp textiles from Białystok province were produced to save local tradition: however it was clear that “what you did for the city buyer was different from what you did for yourself”. The display of some of these textiles is fronted by a screen showing images of people dressed in a variety of folk costumes.

Paradox 3 emerges here: government funding for ethnographic research runs parallel to changes in the countryside, such as collectivisation, that were busy wiping out folk culture. In the 1950s and 1960s there were folk-themed field trips for designers from the Institute of Industrial Design which led to design collectives combining “the expertise and skill of fine artists with the unbridled imagination, fresh ingenuity and prolificacy of informal groups.” Field research resulted in collections for museums, catalogues and atlases, including one of Polish folk costumes assembled by Tadeusz Seweryn. Folk art moves out of the countryside. 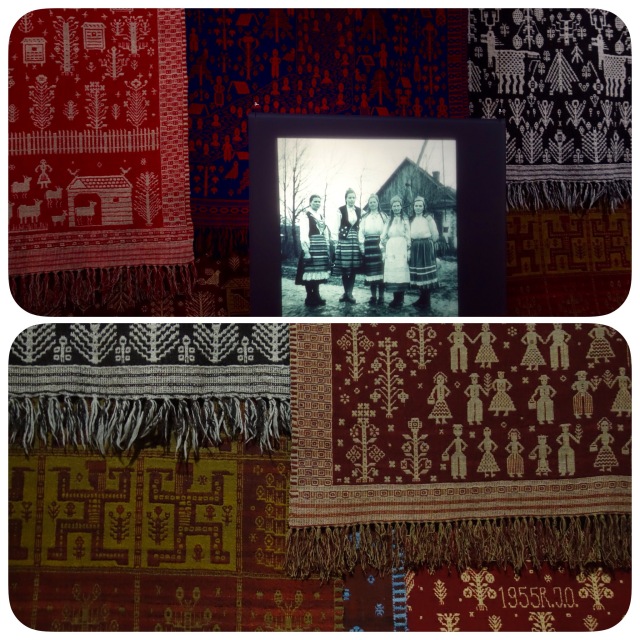 In 1965, many years of research conducted by the Studio of Non-Professional Art Research at the Polish Academy of Sciences institute of Art culminated in an exhibition called “Others”. The most spectacular part was the sculpture section, reconstructed here in the second room. The figures are mainly wooden, polychromed or oiled: a woman with four birds; a pensive Christ; a girl with a deer; a man with an accordion; a deer; a crocodile; a whale; and the wonderfully titled “The devil, death and a messenger”. I am preoccupied, moving round the display, looking for a way to photograph each item separately, when I feel an agitated tap on my shoulder. The attendant is shaking his head and pointing to a “no cameras” sign  – a ban in place for just these two tables. I’m not noble enough to sacrifice the stolen image of the woman: the cupboard-full I am free to photograph. 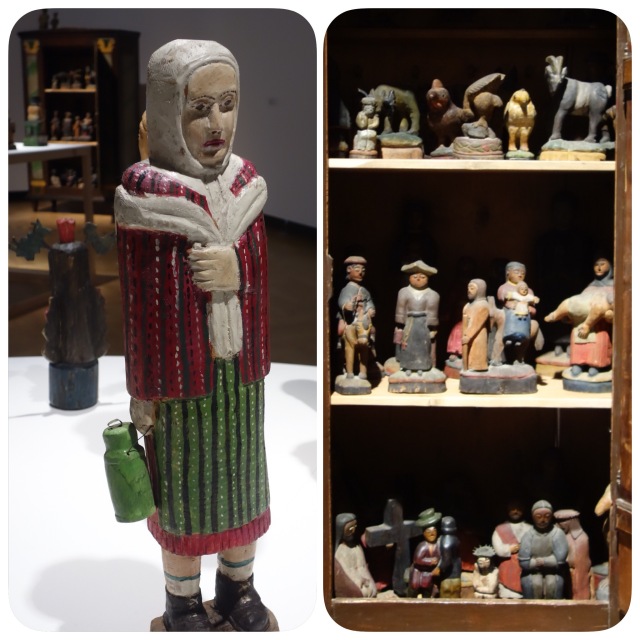 The third room is spacious, two tables displaying ceramic jugs beautifully free of  glass cases. Antoni Kenar, a teacher at the High School of Fine Arts in Zakopane, crafted these in 1948-49, drawing on folk, children’s and prehistoric influences to achieve “the rawness of the primitive.” The rest of the space in the room is filled with sound, improvised music inspired by the traditional music of the Radom area played on instruments including the violin, basolin and hand drum. 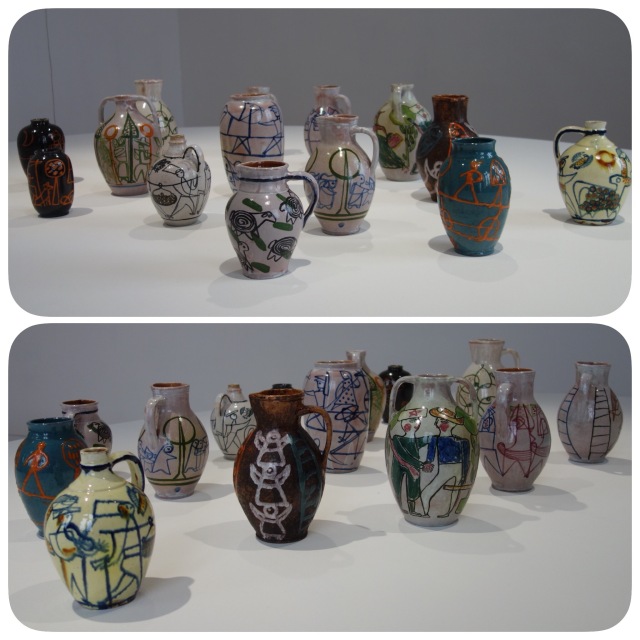 The exhibits move away from individual objects to focus on buildings. As part of the government’s six  year plan, Nowa Huta was built near Kraków as self-sufficient housing for workers, a symbol of transformation. In that city now, the Cepelia store retains the original 1950s interior, complete with hand-painted ceramic tiles on the ceiling like these, representing soviet-era Polish design drawing on folk art. A far cry from the pomposity and grandiloquence of the Palace of Science and Culture, and Paradox 4. 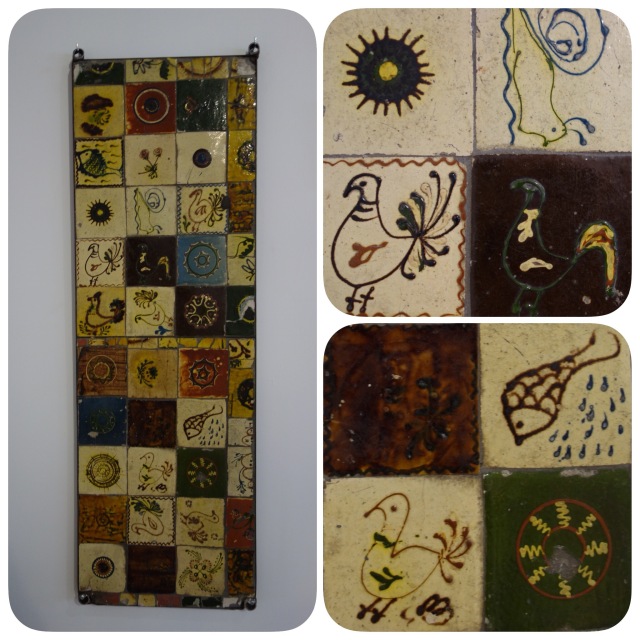 In 1959, the determination “Peasants will have a house in Warsaw”  led to the building of Dom Chopła, a hotel and cultural centre to cater for  organised groups visiting from the country. Modernist inside and out, it contained a library, a common room and a combined cinema / theatre. It is now the Hotel Gromada. As an erstwhile Australian peasant, I’m contemplating spending a night there. 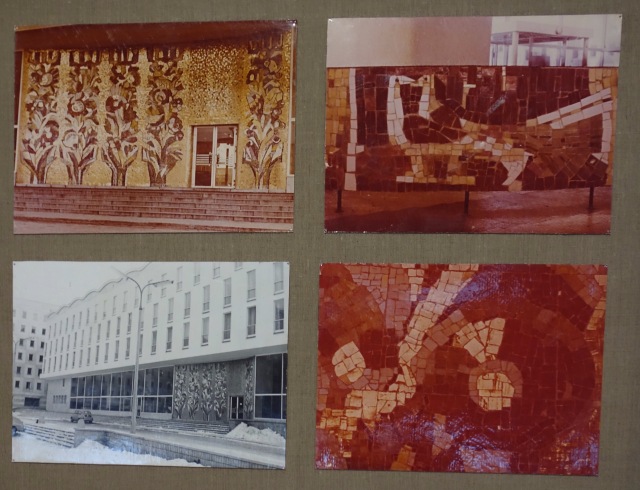 The final room contains 3 big screens showing dancing and processions; posters using folk-art imagery with a camera ban for most of them; and a number of sculptures. The chunkiness of the dancers is social realism in style, but somehow other elements intrude: athleticism, grace, even something mildly bawdy – from the other side the women’s breasts are dominant, and the man’s hat suggests maybe the decadence of the jazz age. Paradox 6?

Paradox 6 comes in the form of the 1953-5 plaster models for a sculpture group called Regions of Poland by Franciszek Masiak. Intended for the state council building, it shows pairings of people who are really listening to each other in a way I find both intimate and touching – not at all as I conceive of discourse under communism. 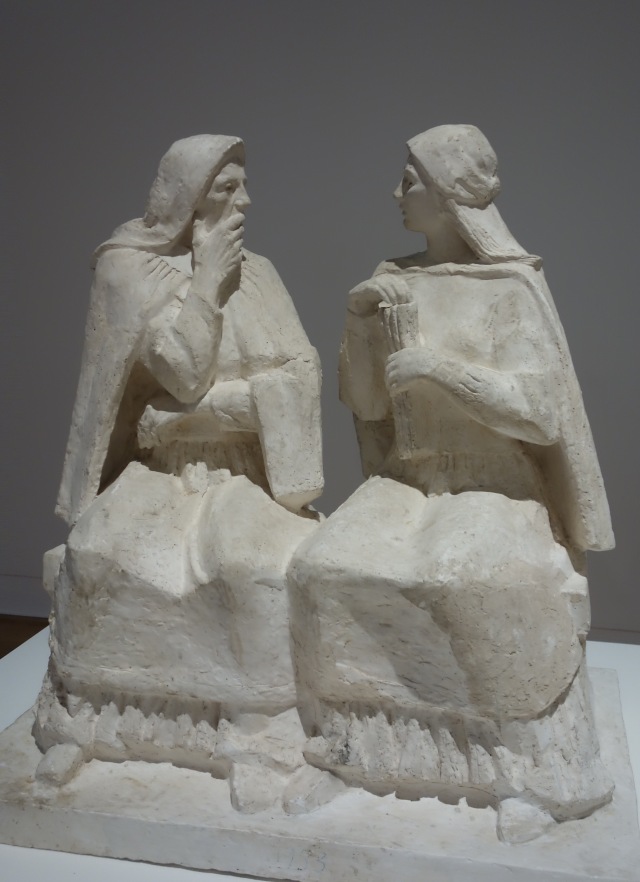 The final information panel sums up the overall paradox of folk art under communism: folk traditions were equated with superstition and anachronism, and yet in an economy geared to industrialisation folklore was politically and economically exploited. The peasants were meant to feed the city and also entertain it: the annual Cepeliada festivals organised by – wait for it – Folk Industry Central, combined modernism and folksiness. The intelligentsia saw the countryside as “exotic”and sought its products, in much the same way hipsters now frequent the soviet era, still government-subsidised, milk bars.

The advertisement for the Polish airline encapsulates the paradoxes that have been apparent throughout the exhibition – technology and folk linked in paradox.

It’s time to leave the exhibition and my encounters with yet another side of communist Poland. I take the paradoxes and my ambivalences with me, as I go down the grand staircase towards the grand front door (which opens automatically.)

But first I have to retrieve my coat from the cloak room. As I descend, I’m surrounded by disconcerting mirrors and have to watch my footing on the marble stairs very carefully. Halfway down I’m deluged in red light and neon, and a perspective stretching through arches, leading who knows where. When I stop to photograph, I realise it will invitably be a multiplication of selfies. 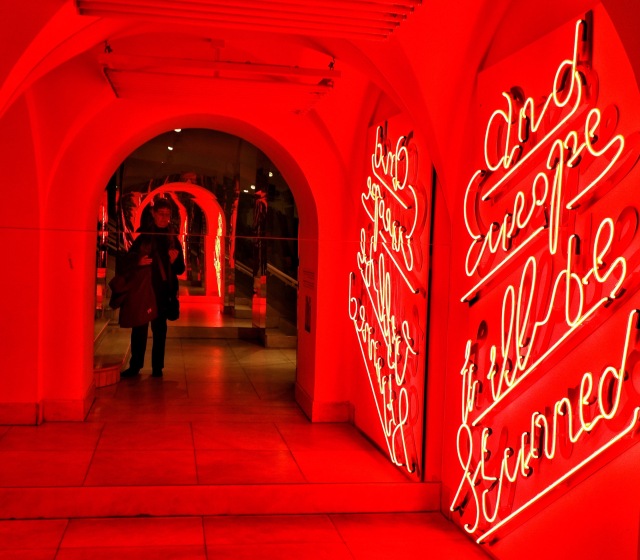 I step outside into afternoon rain, and walk through Saxon Garden puddles, under autumn trees, to the tram.

A retired Australian who spends a lot of time in Warsaw, and blogs as a way of life.
View all posts by morselsandscraps →
This entry was posted in museums, photos and tagged architecture, folk art, sculpture, selfies, Zachęta. Bookmark the permalink.

19 Responses to Poland – a land of folklore?