Vignettes from a morning walk 3

I hate to say this, but I, non-shopper extraordinaire, had a wonderful time walking round the geometry and destabilising reflections of the Unii Lubelskeij shopping complex, not for the first time. Oh, and I have to confess that I did buy something. I spent 1.99zł (70 cents in Australian dollars at the current exchange rate) on a thin notebook to use as I launch into an effort to pick up a bit of Polish.

In the last week, information panels have been springing up in my neighbourhood celebrating icons of Mokotów. This one marks the spot where the post-war Kino Moskwa stood, the eleventh cinema in Warsaw: it was going to be called the Evening cinema, but ended up being called the Moscow cinema. It was after all 1950. The screenings on opening night were a film about a Polish communist and a soviet feature film called “They have a homeland”. The theatre held 1200 (or maybe 2000), and had luxury padded chairs and marble columns. If you look closely at the old photo you’ll see the theatre lion, who is now standing beside its mate on a marble base in front of the replacement buildings, the only remnants of the Kino Moskwa.

(This information comes to you courtesy of my notebook for mastering Polish, a little bit of knowledge of Polish vocabulary and grammar, the iSpeak Polish app, and an old facility in making translation leaps based on instinct, a skill honed in the Latin classrooms of my youth.) 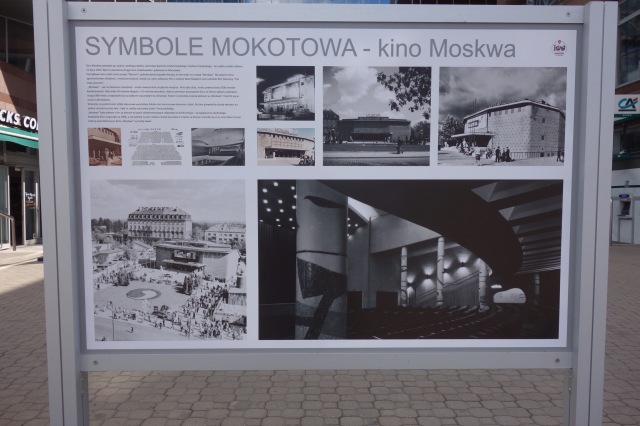 Fresh vegetables on the doorstep

For a woman who lives 25 kms from her shopping town in Australia, there is luxury in being able to whizz downstairs and top up the supply of fresh vegetables or fruit from a stall just over the road – our apartment is in the rather dingy looking block in the background – and from a small shop, tempting with purple and yellow this morning, half a block away.

I rounded off my morning’s stroll by making an appointment for a haircut on Monday, and returned home feeling disproportionately triumphant. After all, it’s not as if I conducted this transaction in Polish. Next time.

A retired Australian who spends a lot of time in Warsaw, and blogs as a way of life.
View all posts by morselsandscraps →
This entry was posted in architecture, photos and tagged old cinema, street stall, Unii Lubelskiej. Bookmark the permalink.

32 Responses to Vignettes from a morning walk 3