Posted on June 8, 2016 by morselsandscraps

Three months gone already! One quarter of the planned year away from Potato Point, and time for the monthly stocktake.

This month has been pure gold with Maja and Jaś. About half way through they began accepting us as a desirable part of their lives, seeking our hand walking in the park or to the tram. One day they were in the playground at school at pickup time. They saw us; their faces lit up; and they rushed towards us and leapt into our arms.

We become bolder: they now ride their bikes to school on our days. However they believe they own the footpath. We tense as they speed towards an old lady with a walking stick or a mother with a pram, obviously believing that the path is their private domain. Jaś even plays an occasional blocking game with pedestrians.

Two new characters appear in our games. The Cellar Fella is a denizen of the three cellar complexes under our apartments. He lives down there, disguised as a pile of cardboard boxes, until he emerges for nighttime adventures on the bikes. Each time we pass the cellar doors we greet him through the keyholes. Sometimes he’s scary, sometimes he’s friendly. “This little cockatoo” is the other game. This little cockatoo lives in a nest in a hollow tree. It keeps falling out and hurting a wing which needs either an ambulance or a bandage. There’s plenty of scope for exercising voices: the screeching of the cockatoo and the weehaw weehaw of the ambulance.

I watch with delight a three-way game in the playground. First it’s Jaś and Tadeusz, tearing around with helmets on. Then Maja goes to her bike and retrieves her helmet, so she too is one of the gang. They are endlessly inventive with playdoh. It becomes popcorn being expertly popped in a saucepan with all the right gestures; or a screwdriver to mend the scooter when it has a mechanical failure; or a large purple tree that I’m given to take home and held accountable for.

Maja occasionally approves my Polish pronunciation, although she has been known to correct my English. I am awed by their certainties:  they are awed when I recite “The owl and the pussycat” as they follow in a book I can’t see. They know how storks stand, and that it’s ambulance drivers, not doctors, who give children balloons.

Janek’s timescale for the past is “yesterday”. It was puzzling at first and I racked my brains to figure out what event on the day before he’s talking about. Then I realise it’s the indicator of any time past: “Yesterday we saw tawny frogmouths at Uncle Stevie’s” and “Yesterday we played in a train with little Hugo” are both memories from the visit to Australia in February.

The progress of spring

The blossoming of spring is fading into carpets of discarded bloom, drifts of seeds in the air, and the formation of samara. I’ve become quite intimate with the sycamore outside the playground near the lake in Park Morskie Oko and watched the same cluster through all its phases. The weather is much warmer and prone to afternoon thunderstorms. The shade is an even denser green. And it is, unbelievably, summer.

I’ve been to a few exhibitions: Frank Stella’s abstracts based on Poland’s destroyed wooden synagogues; the fifth gallery of the Museum of the history of Polish Jews; photographs of the rebuilding of Warsaw 1945-1955. Parks have featured too: Pole Mokotowskie and Park Dreszer, as well as Morskie Oko. As the days become warmer I’m beginning to go out earlier, notably to catch the river and the Old and New Towns shortly after daybreak and to visit the Mirowski markets. I’ve made some lovely incidental discoveries and expanded, minimally, my acquaintance with Polish history.

I talk to the wall in Polish with moderate confidence when I pick up Jaś and Maja, only 6 words, but at last I’m fluent in them. I even manage to detach one word  when a staff member explains volubly why I am getting no response: I hear “ogród”, and know that Grupa 1 is outside in the playground. Maja’s little hand now frequently seeks mine as Janek’s has always done. I’ve made the mighty final decision to actually stay in Warsaw for the 12 months advertised (our return tickets are for September 2) and extend the rental of this very convenient apartment. I’ve catered for six, two nights a week, on two hot plates, taking into account the resident vegan and Jaś allergies. I haven’t yet managed to dish up anything Maja will eat. Her food criticism is unequivocal and sophisticated: “Yuck!” 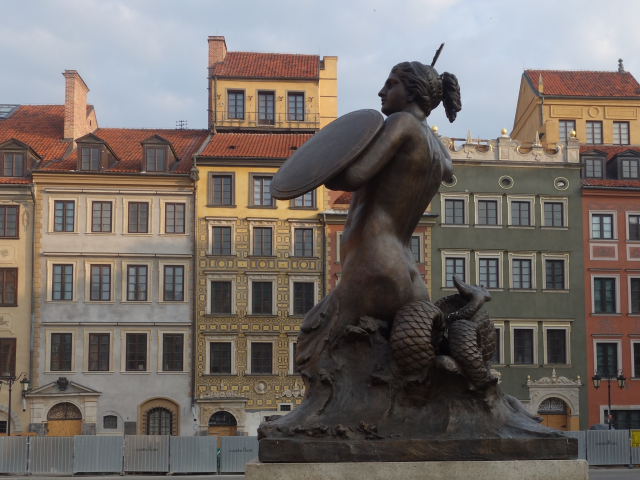 My Eagle Heights mob meet the neighbours on their block in northern NSW: one had a career in biodiversity management and wants to lock up his 800 acres under a conservation covenant; the other one handcrafts wooden instruments and offered his tractor and his property to ride motor bikes on. My Stanthorpe daughter has been sacked from her tourist information centre job by email, along with five colleagues, because council plans to replace them with one person: her response is typical: “I won’t be able to buy a motorbike, but I’ll have more time for politics.”

There have been two deaths: one a distant acquaintance from up-river days, younger than me; the other, a woman who was a leader of feminist spirituality in Australia and a wonderful creator of ritual. One very precious friend had out-of-the-blue emergency surgery. Two south coast friends have confirmed visits to Warsaw in September. There are a few events I’ll be sorry to miss: jazz at the Priory; an exhibition at the NLA of the colonial sketches of ST Gill; a Japanese drumming workshop at the Four Winds pavilion.

A retired Australian who spends a lot of time in Warsaw, and blogs as a way of life.
View all posts by morselsandscraps →
This entry was posted in Uncategorized. Bookmark the permalink.