Posted on June 1, 2016 by morselsandscraps

I agonised over Paula’s b&w Sunday theme for days, wondering how on earth I could encapsulate “timeless”. I was confused, partly because I’m living in a city that can claim some antiquity, although a lot of it was only rebuilt 70 years ago. Having seen an exhibition of Warsaw’s resurrection after 80% of it was reduced to rubble by the Germans in WW2, I could perhaps explore the timeless spirit of people who survive appalling losses, a spirit seen over and over again in the brutal parade of the centuries.

But what my mind kept returning to was the timelessness of the relationship between grandmothers and grand-daughters: the loving bond that develops between them; the skills that are passed on through that love; and the absorbed concentration that accompanies the bonding. So the image I offer is a photo my daughter took. Maja and I are reattaching legs to an alphabetapillar, a gift from the Australian aunt and therefore another manifestation of the timelessness of connection between the generations of women in a family. (My grandson was still asleep during the surgery, or my reflections may not have been so female-focused.)

Maja has not handled a needle before, or taken part in the mending process. Such learning stretches back through a long line of woman passing on what used to be women’s skills. I think of basket weaving in Australian Aboriginal communities; lacemaking in Croatian families; ikat weaving in Ecuador: those things UNESCO calls “intangible cultural heritage”.

Am I stretching a point to connect a bit of toy mending in Puławska St with timeless women’s traditions? 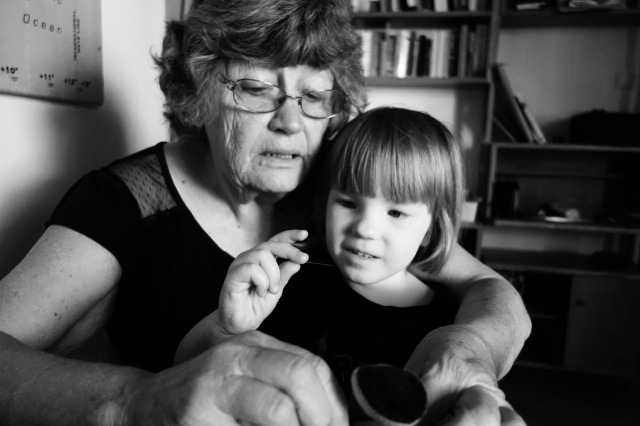 A retired Australian who spends a lot of time in Warsaw, and blogs as a way of life.
View all posts by morselsandscraps →
This entry was posted in challenge, photo and tagged b&w Sunday, family, grandchildren, women's traditions. Bookmark the permalink.