Posted on April 12, 2016 by morselsandscraps

Let’s see. How can I encapsulate the month? First of all a bit of familiar Warsaw maths: subtract the time I’m unavailable to the outside world because I’m begermed. That’d be 10 days. As my friend Rosemary pointed out “at least you don’t have to worry about losing precious time to bed rest as you have more than 11 months up your very long sleeve of this extended stay.” Still, I don’t have to like it.

So we’re established. Now for the many pleasures of this unexpected migration.

The twins: They’re at the top of the list as they ride their bikes, read books, giggle, imitate, play inventive games with toys and words, make themselves at home in our apartment, refuse to go to sleep till 11 on a so-called sleepover, fight over the tractor, pretend they’re going to the Stralia, demonstrate very strong preferences, plant bean seeds, and generally delight.

A Polish Easter with family: The blessing of the baskets, the ritual eating of a slice of the blessed egg, food in mountains, warm welcome, exchange of gifts (a hip flask for each dziadek!), and grins as a substitute for comprehension.

Preschool: We walk through the park to preschool (when we’re healthy enough) and are slowly learning the rituals, although we both fluster talking to the intercom to liberate Maja and Jaś at 3.30. The few times we’ve collected them in the afternoon by ourselves, the walk home can take up to two hours when it’s combined with beetle and dog watching, stick-and-worm-cast collecting, bun eating, and occasional horizontal resistance to everything.

Spring: When we arrived the trees were bare, and there was even a light fall of snow. Pani Wiosna has made a grand entrance panoplied in blossom, bud and leaf and, occasionally, clothed in  warmer weather and sunshine. She demands lyrical obeisance, which I’m happy to provide. But she also demands the naming of parts. That’s a lot more exacting. Fortunately J is a devoted acolyte. 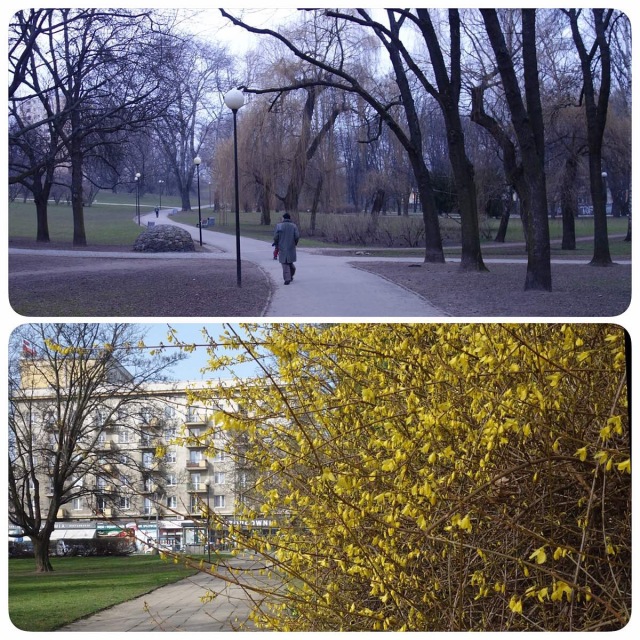 A ramble round the Old Town: This does not lose its charm with repetition, and even holds surprises.

And finally, my two favourite photos. 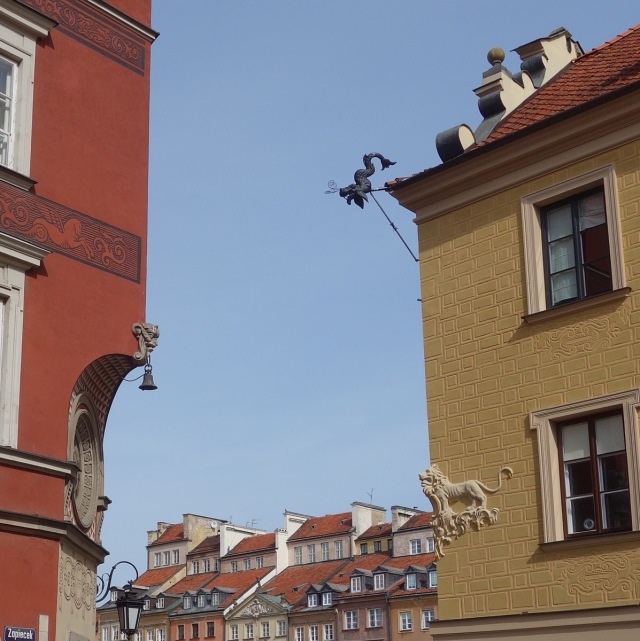 Meanwhile, back home: one son swims with dolphins; the other son finds a quoll and an endangered fish on his block of land; my Australian daughter absconds from Facebook; my most beloved senior grandson relishes high school; my most beloved senior granddaughter worries because her assignments are always in early; two friends go to the incomparable Four Winds festival at Bermagui; one of my oldest friends leaves this world in a glorious celebration of his life; another friend has surgery where I could have been useful had I been closer; yet another friend is hoping to come to Poland in September.

A retired Australian who spends a lot of time in Warsaw, and blogs as a way of life.
View all posts by morselsandscraps →
This entry was posted in photos, stocktake and tagged Easter, grandchildren, preschool, spring. Bookmark the permalink.